The Codex of Her Scars is finished and out with publishers. Hopefully it will be released this year. Here’s the blurb:

When Tey and Snaith are maimed in a freak accident they are deemed worthless by their clan. Unable to fight or work, they are apprenticed to rival sorcerers who don’t necessarily have their best interests at heart. They must learn quickly, if they are to survive long enough to become sorcerers in their own right. Plots are uncovered, scores are settled, and an ancient artifact is discovered that will draw the attention of the ruling Helum Empire and set into motion events that will confront Branikdür with its dark and sorcerous past.

Dead or Alive (A novella of Shadrak the Unseen) is nearing completion and will likely be released in the next few weeks.

Shadrak the Unseen should have known better. Stealing from one wizard on behalf of another was the sort of job he’d sworn never to take. But times were tough and grief had left its mark.

The thing that should have really warned him off, though, was that the artifact he’d been commissioned to retrieve was a ring crafted by none other than the Witch Queen of Thogani, the Desecrated City.

With the job half-done, Shadrak is caught between the minions of one wizard and the threats of the other. If he could just get the ring back to Pellor and the stygian sorcerer who’d hired him, he’d have enough money to appease his creditors and buy himself some time.

I’ve started work on a new novel called Immortal, which is in the mold of heroic fantasy. This will be the main focus of my writing for the first quarter. Principal characters are: Carn Carlac, an elderly warrior and former king who is honour-bound to live out the natural course of his life; Neb “Cutter” Thrall, a rogue and assassin who has fallen to the bottom of the dung pile, but who may yet have one last crucial mission in him; and Mala Setis, a refugee and a whore with a troubling mixed bloodline.

I’m also continuing to slowly pull together all the Shader material, and some new stuff, into one continuous story arc called Templum Knight.

Regarding the Nameless Dwarf, I’ve put off continuing the story for some time due to other writing commitments, but there is a strong chance that a new Nameless Dwarf novel may appear in late 2017.

If you have any requests for stories you’d like to see, any feedback, or any questions at all, please reach out at derekpprior[at]gmail[dot]com

Finally, a dozen or so signed print copies of Carnifex are still available for $20 each. Email me with your interest. 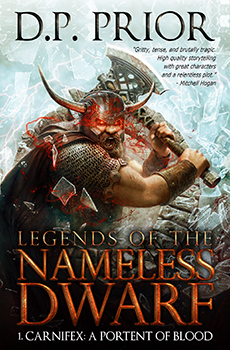