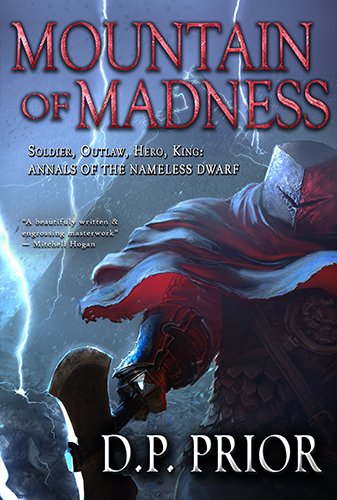 Awakened from an induced year-long slumber, the Nameless Dwarf is tortured with memories of slaughter and must come to terms with who he has become: an outcast, a butcher, the most reviled of dwarven-kind.

As forces of unimaginable destruction coalesce around the mountain fortress of a mad sorcerer, the philosopher Aristodeus puts together a team for a last desperate attempt to avert the coming cataclysm:

A knight besieged by doubts, who has been prepared since a child for the current crisis, yet is crumbling under the pressure of the task before him;

An albino assassin who denies the truth of what he really is;

A woman with a black sword as disturbing as the axe responsible for the massacre at Arx Gravis;

And a dwarf with no name, who will either carve out the path of his own redemption or condemn the world to a night that will never end.