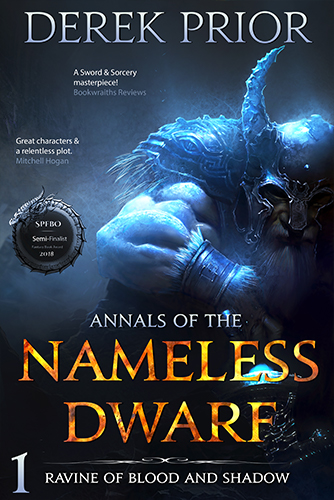 A child is born in the shadows of the ravine city, a child who will end the self-imposed exile of the dwarves and usher in a new age of glory.

Years later, Ravine Guard Carnac Thayn discovers a break-in at the Scriptorium. A dwarf has been murdered and a book stolen, but the ruling council do nothing.

Then, when Carn is called to investigate thuds and crashes from the mines, old horror rises from the deep, and the city is threatened with slaughter.

Rumors begin to circulate about a mythical axe said to be lost below the earth, an axe wielded by the dwarf lords of old that might just be the last hope of a race marked to die.

But deception is rife, and unseen forces manipulate all paths to the future.

It is a pivotal moment for the dwarves, and Carn must make a choice that will either save or damn his people.

Blood will flow in rivers through the ravine. Friends will become foes. A name will be forgotten.

And a hero will rise.