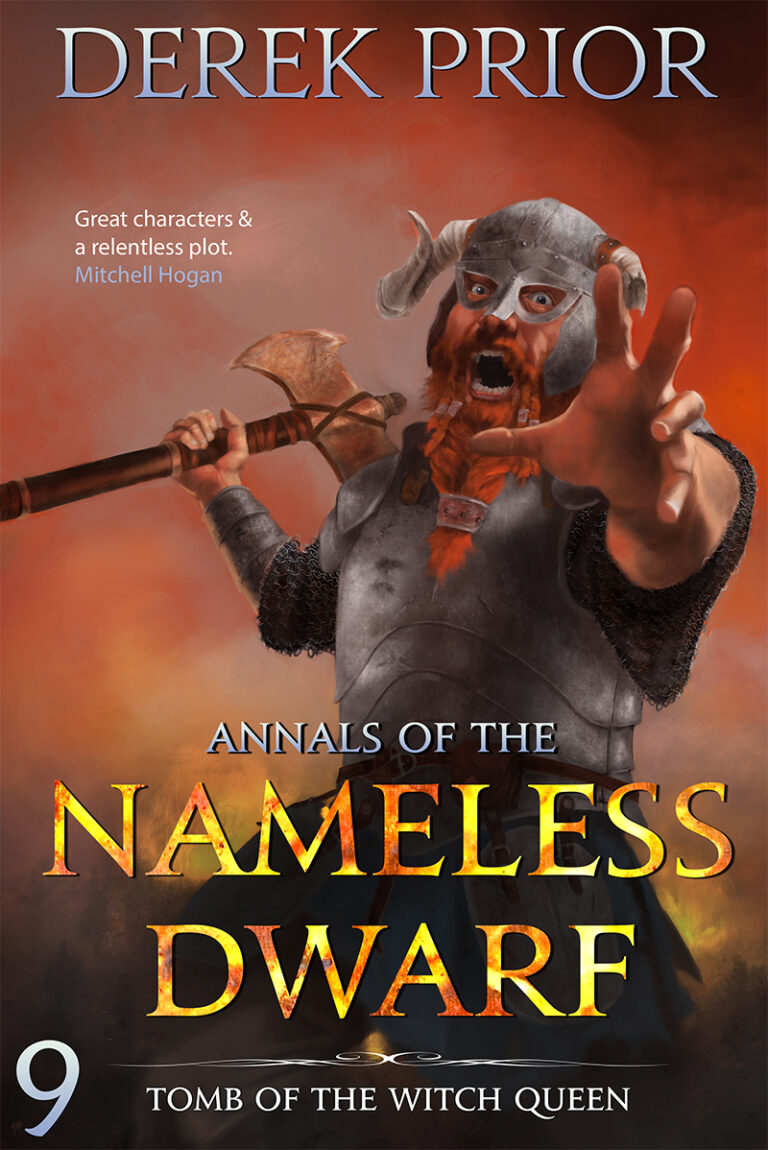 I’ve finished the second major revision of Tomb of the Witch Queen, which involved reading all 190,000 words aloud. The individual scenes have already gone through multiple edits, so these full revisions are concerned with catching inconsistencies, ensuring the flow of the plot, looking at peaks and troughs, character development etc. They also involve a good deal of copy editing, and as a consequence, the word count is now down to 184000 words.This last revision was grueling, but at least I’m at the stage where I can breathe a sigh of relief: it all fits together and looks like (to me, at least, for what it’s worth) a strong end to a very long series.

Yesterday, I ran a few automated spell checks (in addition to those I use when writing, and in addition to the manual ones); then I imported the manuscript into Vellum, tweaked the formatting, added a map, copyright page, acknowledgments etc. So, the book is ready to go.

But I still want to do one final read through, which starts tomorrow! I don’t expect any major changes, but there are bound to be minor tweaks, and occasionally, at this stage, I get a few nasty surprises, which may take a bit of creativity to fix.

So, by the end of next week, I hope to be ready to release the ebook. The print copies will follow very soon after, and we intend to begin recording the audiobook in the next few weeks.

This is probably a good time to thank everyone who has read the rest of the series, and especially those of you have followed the story from the beginning (The Ant-Man of Malfen was published in 2009, so it’s been a long ride!) The first stories (The Complete Chronicles) probably wouldn’t have been written, if not for you early readers (you know who you are).

After that, subsequent volumes were a lot easier to write, because I knew my target audience (people as daft as I am, or perhaps people who enjoy the old Sword and Sorcery tropes, but with an emphasis on character, pathos, and humor). I know not all fantasy readers like this style. Some have indicated that they find it (almost) irreverent. That’s okay. Perhaps those people are not my target audience. Indeed, the target audience may be far smaller than what most fantasy authors would like. But these are the stories I felt compelled to tell, and they still bring a smile to my face when I re-read them. If they have entertained even a handful of readers, they’ve achieved far more than I ever thought they would.

In actual fact, the stories have been quite successful, in a modest way. If not for the Nameless Dwarf, I wouldn’t have been able to buy my house, or give up my day job (which was not my idea of fun). But, Game of Thrones this series most certainly is not. If anything, it’s Thongor and Elric down the pub with Basil Fawtly as the bar tender.

As Brother Otto processed with the forty Patriarchal Advisors towards the Temple of Witandos in Vanatus City, he experienced a mixture of awe and loathing. The marble facade and fluted pillars, the colonnaded walkways that flanked the approach across the plaza, the cast-bronze statues of the founding heroes of Vanatus, the monsters they had vanquished, and the long-line of Emperors and Empresses impressed upon the mind the richness of Vanatusian history and culture, but warned the soul against excess, hubris, and corruption.

The fifty-foot statue of Witandos the One-Eye glared down from the top of the steps, but the Supernal Father looked worried to Otto, the last stand of a false religion that would soon be swept aside by the incoming tide of the Way.

At the base of the statue, a dozen pagan priests stood around the altar of sacrifice, watching the thousands of white-robed Wayists packed into the plaza. Their eyes burned with indignation at this intrusion onto their holy ground, this blasphemy. But there was nothing they could do about it. The ailing Empress Sulani had invited the Patriarch to have his council here. Word was, the Empress had secretly converted. Even if she hadn’t, most of the legionaries patrolling the plaza had. The Wayist faith had spread like wildfire through their ranks. The priests of Witandos must have known it was only a matter of time.

Otto and the rest of the Forty fanned out in front of the temple steps, where His Divinity, Patriarch Alandis II waited upon a sedan chair of carved acacia, the four toga-clad women who had carried it standing perfectly still behind, muscular arms glistening with oil, faces hidden behind white leather masks with crescent eye-holes.

The Patriarch raised his hand in blessing, then gestured for the Forty to sit on the folding chairs that flanked his sedan, twenty on one side, twenty the other.

Otto took his place at the Patriarch’s right hand. Alandis II had made it known he valued the counsel of young men more than old, and Otto, at nineteen, was the youngest of the Forty. He was also—as his mother had repeatedly told him—exceptional, both in terms of his intellectual prowess and his sanctity. She’d made sure of that.

Otto’s eyes roved the crowd that filled the plaza, a sea of white whose waves lapped at the island of paganism that was the Temple. Now that the Forty were in place, a new procession started down the aisle between the council attendees: dignitaries from all over the Empire, and beyond. The priests of Witandos might not have accepted it, but the whole world knew there was a shift in the balance of power.

One of the masked women stepped forward to announce the delegates as they approached.

Discreetly—it could have been an accident—the Patriarch’s hand brushed Otto’s knee.

Otto swallowed. How was he supposed to react to that? He risked a glance, but the Patriarch’s attention was on the Satrap of Quilonia and his two aides as they bowed ostentatiously before him.

The three mustached men were gaudily clad in yellow pantaloons and doublets of red and green stripes. Slender swords with basket hilts hung at their hips, but just in case there was any mistaking their loyalty, each wore a knotted prayer cord around his neck.

The Quilonians moved on past, followed by the ambassador from Maranore, a willowy man in a starched white shirt and black tail coat, who doffed his chimney-stack hat but gave only the most perfunctory bow. Next came the Governor of Gallia and his entourage, all of whom wept profusely as they prostrated themselves at the Patriarch’s feet.

The procession of dignitaries went on forever: toga-wearing Gracians; long-haired barbarians from Verusia; Kutzi from the Isle of Ice and Fire in the far north; a lone Aculi cleverwoman from Sahul in the even more distant south—the Way alone knew how she’d gotten here, but there was something about the old woman that told Otto it wasn’t by natural means.

He grew weary of the constant procession, scarce even listening as names were announced, oaths given, blessings bestowed.

But then he saw her, among her father’s retinue: a young woman in a gown of scarlet satin, cleverly cut to expose as much of her dusky skin as possible. Her black hair was stacked atop her head, glistening with oil and braided with ivory beads. She wore golden hoops around her neck. Bracelets adorned her arms, and ankle bells jingled as she walked at her father’s side. Otto had never seen a woman so lissome, so lithe, so… ethereal. He stared at her full lips, her cat’s eyes of green, the trickle of sweat that weaved its way between her pert breasts.

Otto had read about Numosia in his studies, a continent of shadows and superstition that lay beyond the farthest fringes of the Empire. As a boy, he had been enraptured by the stories of Numosian gods and demons, the tales of wondrous magic and perilous sorcery; but his mother had taken that all away from him. “Mananoc’s land,” she had called Numosia when she ripped the pages from his book. “Not fit reading for a luminary.”

“And this,” the woman in the white mask said, “is the Princess Hekata.”

The Princess genuflected with spellbinding grace.

As her father the King exchanged words with the Patriarch, she glanced at Otto, and he looked away, pretending to be absorbed in the unpicking of a knot on his prayer cord. Heat rushed to his face, and he silently begged the Way to preserve him.

He tried not to think about it as the Numosian delegates moved away, but in the brief moment Princess Hekata N’Gat had looked at him, he thought she might have smiled.

4 thoughts on “Tomb of the Witch Queen Coming Very Soon”