The Last Dark is the final book of The Last Chronicles of Thomas Covenant, and the conclusion of a series I first began reading in the late 70s.

Like most of the Chronicles, The Last Dark dips into long periods devoid of action, where characters reflect, doubt, engage in bouts of self-loathing and repudiation, and while some readers might bemoan the lack of breakneck pace, or something gratuitous to titillate their senses, these are the long snatches of calm before scenes of relentless tension and violence that would otherwise be utterly exhausting. More than that, these immersive, languid scenes prepare the way, so that when action comes, it is in sharp and vivid contrast, and it never disappoints. 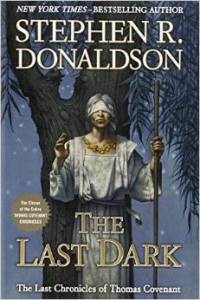 Donaldson is well known for his use of language that has not seen the light of day for far too long; some of his words may never have seen it at all. At times, it can jar the reader from the story; at others it can be, perhaps, too much. But in The Last Dark, it reaches something of an apotheosis. There are passages in which he deploys his entire arcane vocabulary with poetic precision and manages to convey impressions that would ordinarily be deemed “beyond speech.” To my mind, he’s making a strong case for literature to retain what makes it distinct from film, and to go against the grain of what is currently fashionable: novels that are written in the style of film novelizations: simple to the point of being bland, and tighter than a hangman’s noose. Donaldson is fearless with his language; some similarities to Dean Koontz in that respect. At its best, the language soars and functions like poetry or music. There’s no need to keep a dictionary to hand: meaning is mystically conveyed with the precision of a scalpel; bedizening blitzes of synesthetic prose limn crepuscular phantasmagoria rhapsodized with coruscating krills of argent, excoriating vision into the very marrow. I’m actually not being facetious (for once). In this book, Donaldson achieves at a new mastery, at times weaving a spell with words that transcend the need to comprehend them in any mundane sense.

His skills are perhaps at their best when describing innominate horrors, terror beyond the power of regular speech to convey. Not the “language beyond speech” of an Artaud; a language that transcends, and in so doing conveys far more than the crop of modern fantasists with their need to show every last gritty detail with the subtlety of a blunt axe. And don’t even get me started on the religious themes woven throughout The Chronicles of Thomas Covenant: doubting Thomas, the redeemed leper; the Despiser, who knows Covenant as well as he knows himself; the infinite depths of darkness and suffering; a darkness with nothing but despair, but nevertheless a hell to be entered into fully, if there is any hope of salvation; and the suffering, whilst far worse than the skin-deep torments to be found in “grimdark”, is always redemptive. Descents are followed by ascensions, and cruelty is contextualized, given meaning, and transfigured.

It is ultimately such themes—the psychological, the mystical, the religious—that set this book over and above much of the dross in the genre. I could justifiably be accused of being melodramatic, but for me, at least, Donaldson may be the one reason left to continue reading in the genre. This isn’t just entertainment, mass-produced, designed to wash over the passive reader and excite their senses; it’s not pixie shit, or bogged down with pedantic magic systems that I couldn’t give a brass monkey about; and it’s not some fantasy version of Socialist Realism, more concerned with the tang of every taste of broth than with the true drama of life and all its terrible ambiguities.

“Comparable with Tolkien at his Best”, the endorsement read on Lord Foul’s Bane. Perhaps there are more shades of C.S. Lewis: not just in the translation to another world, but in the staggering meditations on suffering, meaning, and redemptive love that filled Lewis’s apologetic works; though Donaldson is never preachy; always hard to pin down, occupying the liminal spaces between the veils of skillfully crafted drama. Because he is always dramatic, and even where it is obscured by the sheer breadth and depth of the world he has created, there is a structure, a theme bubbling beneath the surface that speaks to more than the need to be distracted from reality for a time.

It’s a long book, and part of a very long series; but the time taken to read it, the striving needed to work through some of the denser scenes, is not wasted time. The Last Dark is a brilliant ending to a classic in the genre, and Stephen Donaldson, whose craft, and whose uncompromising pursuit of what feels right for him, rather than following current trends, has emboldened me in my own modest pursuits.