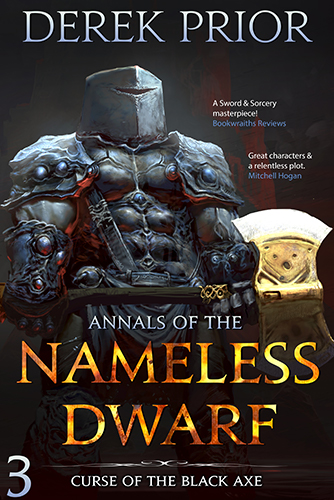 The only thing keeping the Nameless Dwarf from once more becoming the Ravine Butcher is a helm made from the sorcerous ore, ocras, which he can never remove. Without the helm, he would succumb to the power of the black axe that caused the slaughter at Arx Gravis.

After a year of fighting in other people’s wars, Nameless receives a visit from one of the underworld tricksters—a faen—who tells him the day he has long waited for has arrived:

The philosopher Aristodeus has come up with a plan to destroy the black axe and free Nameless from the ocras helm.

With the aid of new companions and an old friend, the assassin Shadrak the Unseen, Nameless must retrieve three artifacts that, combined, will bring an end to his suffering:

The gauntlets of the fire giant, Sartis, whose lair lies in the roots of a volcano;

The invulnerable armor of the Lich Lord of Verusia—an undead tyrant with a penchant for impaling and the drinking of souls;

And the Shield of Warding, beneath which cowers a paranoid god on the fringe of the Abyss.

But things are never that simple. Each of the companions has their own reasons for joining the quests, even Shadrak, who has been bound by an irrevocable contract—to kill the Nameless Dwarf.