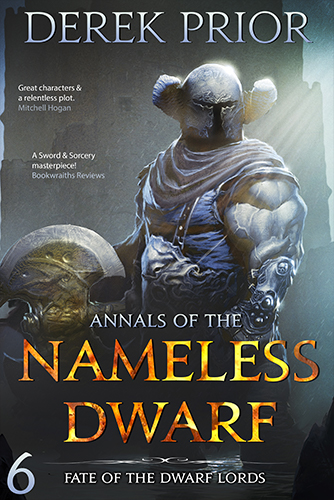 Having worked out his penance and resettled his people in the citadel of Arnoch, the Nameless Dwarf decides to start a new life in the up-and-coming town of Brink.

Seven years later, he has everything a dwarf could possibly wish for—a gym, a beer hall, and a bawdy house across the road.

Then a blood-stained dwarf staggers into town with a message of doom:

Arnoch has sunk beneath the waves, its last defense against the attack of a five-headed dragon.

The one slender hope remaining to the dwarves lies in their distant past: the dwarf lords, who had been created for perils such as this. But for centuries, they have been in exile on Thanatos, a death world likely to change even the greatest of heroes.

With time running out for Arnoch, Nameless must find the dwarf lords and persuade them to come home.