Carnifex: A Portent of Blood (Legends of the Nameless Dwarf Book 1)

A name destined to be forgotten. A cursed axe. An atrocity too great to be forgiven.

For more than a thousand years, the dwarves have hidden away from the world in their ravine city of Arx Gravis. Governed by an inflexible council whose sole aim is to avoid the errors of the past, the defining virtue of their society is that nothing should ever change. But when the Scriptorium is broken into, and Ravine Guard Carnifex Thane sees a homunculus fleeing the scene of the crime, events are set in motion that will ensure nothing will ever be the same again.

Deception and death are coming to Arx Gravis. The riddles that preceded Carnifex’s birth crystalize into a horrifying fate that inexorably closes in. 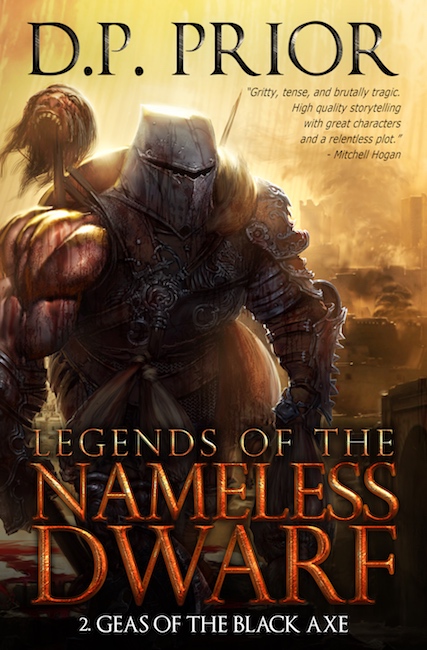 “A dwarf with no name is a dwarf most shamed.”

As the lands above the ravine city of Arx Gravis face their gravest peril, the last desperate hope of Creation lies in a dwarf with a grisly past:

The Nameless Dwarf–a pariah, untouchable, the most cursed of dwarven kind.

But in a world plagued by deception, where no action is free from risk, the road to salvation is shadowed with portents of blood. 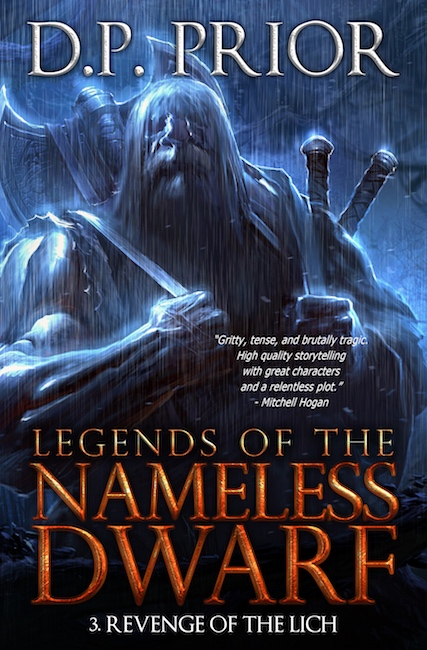 Revenge of the Lich (Legends of the Nameless Dwarf Book 3)

The survivors of the slaughter at Arx Gravis flee their ravine city, leaving its walkways and canals awash with blood.

Convinced there can be no atonement for what he has done, the Nameless Dwarf joins forces with a whiskerless thief, a guilt-driven assassin, and a consumptive wizard. Together, they pursue the dwarves into the lands of nightmare across the Farfall Mountains.

But the companions bring troubles of their own, not least of which is an ancient grimoire that leads them inexorably toward a forest of tar, and an evil from Nameless’s past that threatens his entire race.

The last hope of the dwarves comes from the unlikeliest of sources: a mythical city beneath the waves, an axe from the age of heroes, and the Nameless Dwarf, in whose veins flows the blood of legends. 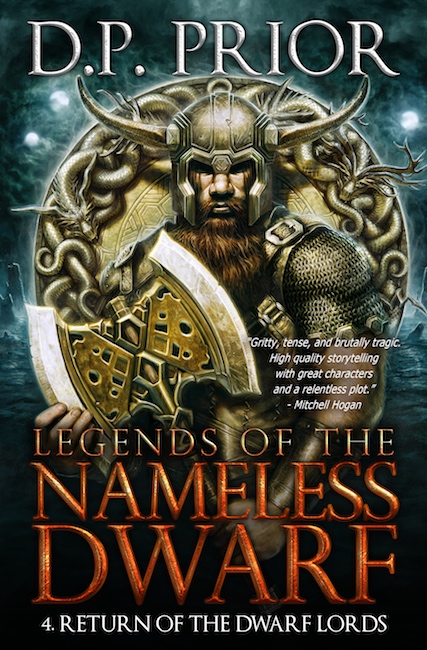 The Nameless Dwarf: the name that is not a name, but is far better than the one he left behind. Freed from the curse that turned him into the butcher of his own kind, he once crossed half a world to protect those who had survived.

Having worked out his penance and resettled his people in Arnoch, the ancient citadel of the Dwarf Lords, Nameless sets up home in the town of Brink.

Now, with everything a dwarf could possibly wish for–a gym, a beer hall, and a bawdy house across the road–his new life is a welcome break from a decade of adventure.

Then a blood-stained dwarf staggers into town with a message of doom: Arnoch has sunk beneath the waves, its last defense against the attack of a five-headed dragon.

The one slender hope remaining to the dwarves lies in their distant past: the Dwarf Lords, who had been created for perils such as this. But for centuries, they have been in exile on Thanatos, a death-world likely to change even the greatest of heroes.

With time running out for Arnoch, Nameless must find the Dwarf Lords and persuade them to come home. 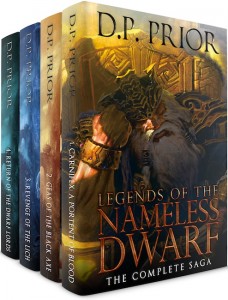 Legends of the Nameless Dwarf: The Complete Saga

The entire Legends of the Nameless Dwarf Tetralogy in one box set:

1. Carnifex: A Portent of Blood

2. Geas of the Black Axe

3. Revenge of the Lich

4. Return of the Dwarf Lords