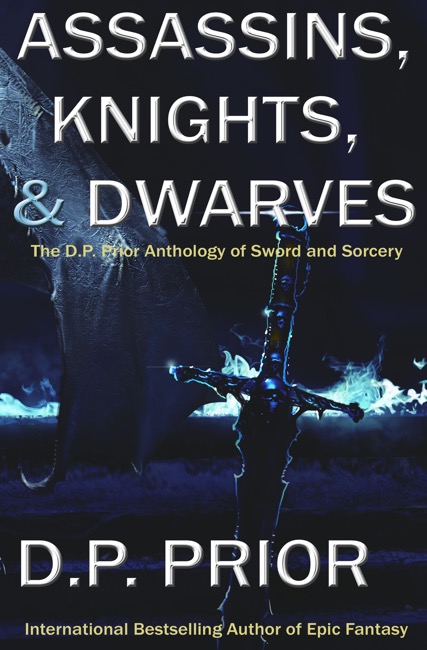 An assassin known as “the Unseen”

A dwarf with a bloody past, destined to be king

From the imagination of D.P. Prior, “one of the most promising fantasy writers on the scene today” (Kindle Fire Department):

Sorcerous events beyond his control force Shadrak the Unseen back to the last place in the world he wants to go:
New Londdyr, the greatest city on Aethir, where he once lorded it over the unified guilds.
And where the Senate have named him wanted… Dead or Alive

Convinced there can be no atonement for the atrocities he has committed, the Nameless Dwarf tracks the survivors of his reign of terror to the brigand town of Malfen. But no one passes through without paying a toll to an underground boss known as the Ant-Man. It is a toll that has already cost many their lives.

3. AXE OF THE DWARF LORDS

The Nameless Dwarf’s ever fragile mood takes a turn for the worse when he discovers a terrible secret at the bottom of the sea—an unstoppable horror that destroyed an entire race, and a mythical axe that brings back the darkest of memories from his recent past.

4. THE SERPENT IN THE LAKE

When the wolf-men attack and the companions are split up, Nameless and Ilesa find themselves marooned on an island at the center of a newly formed lake. With the dwarf unable to swim, and a monstrous serpent patrolling the water, it’s down to Ilesa to get them back to shore. But can she be trusted, what with the bounty on Nameless’ head and her long history of betrayal?

Blightey’s grimoire makes more and more demands, and Silas suspects he no longer has any say in where it is leading him. As his body ails and he grows nostalgic for all he’s left behind, his mind is usurped by visions of a forest of tar, and at its center, wreathed in briars, a staff of deepest ebony.

6. BANE OF THE LICH LORD

All hell has broken loose in the Forest of Tar. Thousands of demonic Feeders consume everything in their path, but top of the menu is dwarf flesh. With the sentient Axe of the Dwarf Lords as petrified as everyone else, the last hope of the dwarves lies in the hands of a shapeshifting assassin with a reputation for self-preservation at all costs.

7. WARD OF THE PHILOSOPHER

The philosopher Aristodeus arrives to commence the young Deacon Shader’s training with sword and mind. Nothing short of excellence will suffice, if Deacon is to fulfill his destiny and avert the Unweaving of all things

9. MY SOJOURN IN THE ABYSS

The Lich Lord, Otto Blightey makes good use of his imprisonment in the Abyss, and pretty soon, the demons can’t wait to be rid of him.