Those of you who have read Return of the Dwarf Lords will have been introduced to Ardo the Strongman, who engages in a bit of bent pressing with the Nameless Dwarf. Ardo is, in many ways, a tribute to the strongmen of yore, and especially to the great Eugen Sandow. Here’s my review of a Sandow biography.

Eugen Sandow has long been something of an enigma to me, a historical figure who nevertheless occupies the twilight between myth and reality. For most, myself included, he’s the statue handed out to modern day Mr. Olympias, or the astonishingly acrobatic muscleman in the opening credits of Pumping Iron, who turns a somersault on the spot.

Chapman confesses that his subject is somewhat hard to pin down. In his own lifetime, Sandow published a fair but, but as was the wont of showmen of his day, much of it was fictionalized, and of course, Sandow was only one among many who used the title “Strongest Man in the World.” 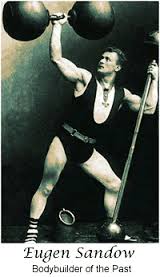 Chapman does an admirable job of trying to fill in the gaps about what we know of Sandow, and often the writing is engaging. Where he disappoints me is in his overuse of innuendo, where he applies, perhaps, a different cultural standard and expectation to some of Sandow’s relationships with male friends. Chapman does provide snippets of so-called evidence, but this tends to come in the form of malicious remarks made by those with an axe to grind.

He makes similar speculations about the strongman’s death, laying to rest the legend Sandow had died some time after lifting his car from a ditch. Instead, Chapman suggests the cause of death as related to syphilis.

Chapman may or may not be right, but the evidence is not exactly compelling. The same would apply to some of his speculation about Sandow’s business motivations, and even the legendary bent press incident with Arthur Saxon. Yes, Saxon could easily lift that weight (and considerably more), and yes, Sandow had trouble during their meeting; but to simply discard his arguments that the barbell had been loaded with mercury on account of Chapman’s apparent low opinion of Sandow’s character… And even when the judge found in Sandow’s favor, Chapman sides with Saxon.

Interestingly enough, I was recently reading Arthur Saxon’s Textbook of Weight Lifting, and whilst I am inclined to agree with the prevailing view of Saxon as an upright sort and a fair-play lifter, he does make the following comment in relation to his instructions for the one-handed snatch:

“This slight press is, of course, strictly speaking, illegal; but at the same time, if it is but a very slight one and performed very quickly, it may easily escape notice.”

Hmmm. Maybe a smidgen of mercury would escape notice, too.

But seriously, Saxon could have beaten anyone at the bent press, and still could. I guess I was just a bit put off by this author’s apparent animus against Sandow.

That aside, the subject makes this a fascinating and compelling read. The writing is largely up to the task, but there was some awkward phrasing that occasionally had me re-reading sentences to work out what the author intended to say.

The photographs add a great deal of interest, many of which are from the author’s personal collection.

2 thoughts on “Review of Sandow the Magnificent by David L. Chapman”