It’s not often these days I find the time to read fiction, and when I do, I invariably put the book down after a few pages or chapters. I guess I write and edit far too much, especially in the fantasy genre, and time is becoming more and more precious. So it’s rare when I get to the end of a work of fiction, whereas I used to consider it a virtue to finish any book I started, no matter how bad.

I got to the end of The Demonologist, and got there pretty quickly, so it was definitely a book that held my interest. What follows is less a review, and even less a critique, than it is a collection of impressions in no particular order. 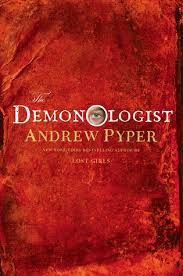 Some great scenes here. There were, however, moments of Exorcist cliche and some less than subtle psychological themes that felt overcooked. I actually thought the Milton component added nothing to the story, and was largely redundant; if anything it felt contrived.

Overall, though, the story was engaging, and the denouement compelling. There were purple patches of prose dotted about, but some sections suffered from the modern fad for sentence fragments (a studious avoidance of placing dependent clauses after a comma, and instead making them into their own sentence, often without a subject). Some of these worked, but when a lot of them were clustered together, I was repeatedly drawn out of the story.

The author also uses the dread “couple beers” construction throughout (“couple OF beers”). It might sound a minor point, but when he uses “couple” constructions so frequently, it becomes (for me) an issue. I know it’s an Americanism (Pyper is Canadian), but even in US grammar, it is incorrect. Fine for dialogue, and the author could argue that the narrative portions are in the protagonist’s voice, but it was another element that kept popping me out of the story.

I very much enjoyed the character of O’Brien, and we certainly get to know the protagonist, even if he is not altogether likable. Tess felt flat, two-dimensional, maybe because of how she is idealized by the first-person narrator. Along with the psychological themes and the meandering journey, this was probably intentional, given the nature of the story’s main conflict, and the interior path the protagonist must travel.

Perhaps the biggest take away for me was the notion of unseen forces everywhere, and the demonic finding a route in through depression, among other things. Not only does this follow Milton, but it reflects an ancient Christian tradition that is extant in the writings of St. Paul, the powers and dominions, and sin not purely an act of wrongdoing, but as an oppressive force influencing and corrupting.