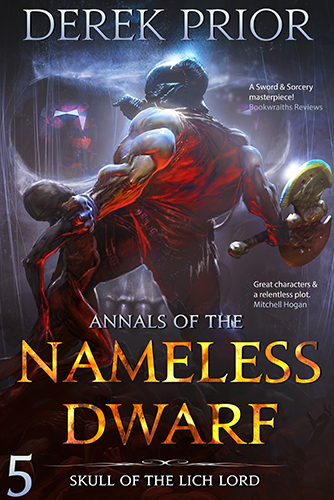 Captured by the survivors of his massacre at Arx Gravis, the Nameless Dwarf is sentenced to die. The assassin Ilesa has abandoned him, and so it falls to the ex-rogue Nils and Silas the sorcerer to stage a rescue.

But with the Lich Lord’s grimoire obsessing him more and more, Silas suspects he is no longer in control of his own fate. Sick and close to death, he is drawn on by visions of a black staff within a forest of tar.

As an ancient trap closes in on the companions, the last of the dwarves are threatened with extinction at the hands of ravenous beasts that live only to feed.

And in the background, orchestrating it all, an implacable horror Nameless thought had been destroyed:

A skull with crimson eyes that feast on living souls.

All that remains of Otto Blightey, the Lich Lord of Verusia.