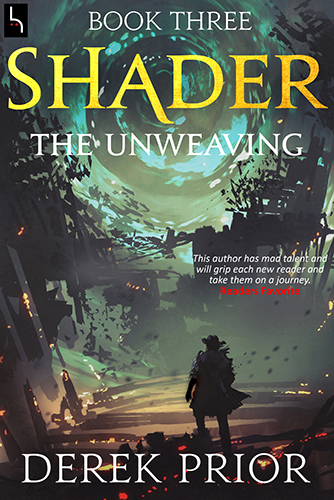 Shader has failed and Sektis Gandaw now holds all the pieces of the Statue of Eingana. Despair hangs like a pall over the battered armies of Sahul and Aeterna. It’s now just a matter of time …

A sliver of hope comes in the form of Shadrak the Unseen, who has the means to travel to the source of the coming cataclysm, the black mountain at the heart of the Dead Lands on Aethir.

But Shader, Shadrak, and Rhiannon discover that Aethir brings a new set of challenges: the Sour Marsh—an oozing malignancy from the nightmare realm of Qlippoth; an arrogant senate that seeks to appease rather than fight; and a volatile secret at the heart of the ravine city of Arx Gravis: a dwarf with no name who could prove the most stalwart of allies… or the deadliest of foes.

Old love has turned sour and regrets run deep. Shader is sick of killing, but can see no other way. Rhiannon’s last defense against all she has lost is a self-destructive rage; and Shadrak’s niggling conscience is causing him more trouble than he needs. Loyalties are called into question, yet all three must bury their differences if they are to find a way into Sektis Gandaw’s impregnable base and prevent the Unweaving of all things.